All Life Support Services instructors are certified paramedics in the Province of Ontario. All have an extensive background in classroom communication, as well as the principles of adult education.

I have lived in Southwestern Ontario my entire life. In 1974, I joined the Canadian Armed Forces as part of an armored recce unit. In Montreal, I was part of the 1976 Olympic Games’ security force. During 1979, I deployed to the Sinai Desert with the UN Peacekeeping Forces and spent time in the Golan Heights.

After being honorably discharged as a corporal in 1981, I attended Fanshawe College and graduated from the Ambulance Attendant program. During 1995, I became a paramedic 1 in Ontario. In 1999, I was seconded to the Ministry of Health – Emergency Health Services Branch to the position of Regional Training Coordinator. My responsibilities included all mandatory training programs for 1,000 paramedics as well as program development. In 2003, Region 2 was added to my portfolio bringing the number to 2,400 paramedics and dispatchers. My duties also included coordinating and providing testing for out-of-province medics wishing to work in Ontario.

In 2010, I left the Regional Training position to work as a Paramedic Supervisor in Lambton County until I retired in 2016.   In 1995, I established Life Support Services to teach First Aid and CPR. Soon the company was providing S-AED instruction to local fire departments as well as first responder courses. Utilizing the EHS model, programs were very successfully developed.   In 2015, Dr. W. Paul Fox joined our team to provide medical direction for our S-AED programs. As of 2018, Naloxone and Epi-Pen training has been added to our medical direction for the majority of our fire department clients.

Started with Life Support Services in 2008 as an instructor. Now in charge of program development, I oversee the development of new programs, maintenance & implementation. Certified Instructor with Heart & Stroke Foundation in BLS, PALS, PEARS & ACLS.

An active Paramedic in Southwestern Ontario since 2007.

I am an Advanced Care Paramedic and enjoy the improvisation that my career allows me.

Not always do we have the equipment that fits the call, so I am able make do with what I have at hand. That’s why I enjoy Tactical Combat Casualty Care that combines my passion for emergency medicine in austere settings with my passion for shooting firearms.

I have varied experience with handguns, shotguns and rifles but enjoy long range shooting the most. Most of all, I enjoy teaching others how to be the best medics and shooters and how to become the best versions of themselves that they can be.

Kent Padfield has been in emergency services for thirty five years and is currently the Fire Chief for the Municipality of Kincardine, a fifty-five member department responding out of two fire stations. He is also the senior manager responsible for emergency management and health and safety. He is the Bruce County Regional Fire Coordinator.

He began his career as a paramedic in Bruce County and was promoted to Paramedic Deputy Chief in 2000. His duties with Bruce County Paramedic Services included Quality Assurance and Emergency Planning.

Chief Padfield is a graduate of the Ontario Company Officer Program, a graduate of the Paramedic Program at Centennial College. He has completed NFPA Fire Officer IV, NFPA Incident Safety Officer, NFPA Fire Inspector, NFPA Fire Investigation, NFPA Hazardous Material and Ice Water Technician certifications as well as Provincial Emergency Management programs and Site and EOC training at the Canadian Emergency Preparedness College. He has the Certified Municipal Managers designation through the Ontario Municipal Management Institute. Chief Padfield is the recipient of the Governor General’s Exemplary Service Medal in EMS. In September 2016 he was awarded the first bar for the medal.

Wayne Russelo is a full time PCP with more than 30 years experience working in Essex county, starting his career in Amherstburg as a volunteer in 1986 and as full time PCP in 1988. Wayne has worked in both rural and urban settings and some more remote calls during a stint with Muskoka EMS in the early 2000s. In 2011 after the attacks in the US , Wayne attended the tactical medic training in Huston Texas with Cypress Creek EMS. Wayne is an avid sport shooter and enjoys keeping current with the latest trends in tactical medicine.

Graduated Fanshawe College Paramedic program in 2012, been working as a Primary Care Paramedic for the past six years. I have been with Life Support Services for the past two years.

Craig attended Lambton College as a student in the Paramedic Program. After graduation, he worked part time as a paramedic in SW Ontario and became an instructor with Life Support Services.

In 2016 he attended Niagara College  in the Advanced Paramedic  Program, graduating on the President’s Honour Roll.

Craig is currently working as a full-time Advanced Care Paramedic while also  becoming a Master Trainer with Life Support Services.

Andrea graduated from the Fanshawe College Paramedic Program in 2004 and has been working as a full-time Paramedic in Southwestern Ontario ever since.

She began teaching with Life Support Services in 2018 and has since completed the National Association of EMS Educators level 1 and 2 - specializing in adult education and program development - as well as a post graduate certificate in Emergency Management.

Andrea has taken an active role in Critical Incident Stress Management by accepting the lead role with her service's Peer Support Team and becoming a member of her County’s Volunteer Fire CISM Team.

With a strong passion for travel and humanitarian work, Andrea diligently volunteers her time to numerous deployments abroad to conduct medical outreach programs and train Emergency Services in underdeveloped countries.

Graduated from St Clair college paramedic program in 1999, started my career as a paramedicworking in Elgin County in 2000. As the newest instructor I am very excited to be part of this team.

I am originally from London Ontario and attended the University of Western Ontario. I graduated in 1999 with a Bachelor of Science in biology. In 2002, I completed an Honours Bachelor of Health Sciences degree, from which I graduated with distinction. I subsequently attended the Doctor of Medicine program at UWO and graduated in 2006. Following medicine, I completed a 2 year residency in Family medicine and obtained certification with The College of Family Physicians of Canada. I have been an active member in good standing since 2008. I currently practice as a family physician, and act as the associate lead in the Elmwood Family Health Organization.

I have served as the medical director for Life Support Services since 2014. My role has been to review and assist the development of protocols, as well as to review calls.

15% OFF ALL IFAK POUCHES 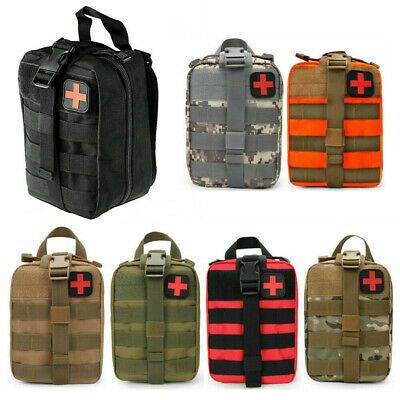 Perfect for the car, boat, camper or the great outdoors.

GET YOURS TODAY IN OUR ONLINE STORE!!